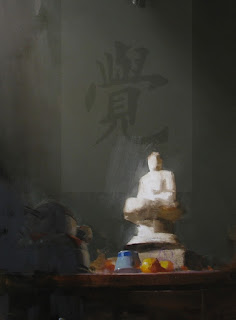 As I mentioned in my previous post, I have been working on a long term painting project. Instead of showing the final result only, I decided to share the process with you. The project is the continuation of my calligraphy/still_life painting I started a couple of months ago. The Chinese character in the image means "awakening". I combine the calligraphy with a scene of a Buddhist shrine, since the word "Buddha" happens to mean "the awakened one" in sanskrit. Awakened from what? That is a very interesting question, but you can think about when you have time.

This painting is relatively large: 18" x 24". I have spent five days on it already. I work only several hours each day on it, since I have so many other things on my plate. I have to spend long hours dealing with the demon in me as I talked about previously. Thanks to all of you who wrote me wonderful comments on my battle. We will talk more on that topic later. With this painting, I used a very different approach. I don't have a fixed setup. I design the light and value in mind first, then found representative objects to form the scene. I combined painting from life and using photos. I altered freely the sizes of objects according to my design. I used computer graphics to simulate the effect so I can visualize the result before I paint it. As a matter of fact, the image you see today is not a pure photo of my painting. The calligraphy is an overlay to show me the effect. With this approach I can set up the still life on canvas directly and gradually, instead of having a fixed setup in my shadow box. I did a way more thinking than push paint. With this approach I gained more freedom. I can vividly put on canvas objects which do not exist in the real world. Now this painting has began to show the effect I wanted. I am creating an illusion in front of you. However, my intention of this illusion is to help you, including myself, to be awakened from the delusion of the world, and see the true reality.

Posted by Qiang Huang at 9:47 AM
Email ThisBlogThis!Share to TwitterShare to FacebookShare to Pinterest
Labels: 18 in x 24 in, oil on board, Still life

What a great subject and you have captured an atmosphere here - wish I could do that with mine...(note to self: must work on that).

This is lovely, Qiang. 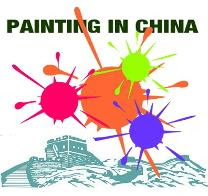 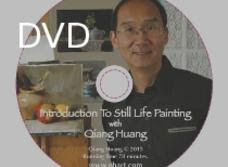